If you have forgotten what it used to look like or are new to my page you can see it here.  The original post was with absolutely nothing changed to the room.  Just us moving in with our furniture and me taking some pretty terrible photos of the room.

I have wanted to share the living room for so long.  I almost did this post a couple of weeks ago and then decided to wait until I gave Kyle's birthday present to him so it could be in here.  I have put a lot of time and resources into this room since we spend all of our awake time in it.  It probably has had the most done to it compared to the rest of the house... and I am pretty happy with it, despite a few things I would have done different now that it is mostly finished.

Shortly after we moved in, Kyle's parents helped me paint the walls in this room.  I love the change that just a coat of paint makes for a room.  Not too much longer (after what seemed like forever) I found the rug on Joss&Main.  I knew I wanted yellow as my accent color but it took forever for someone to finally have a yellow rug at my price point. 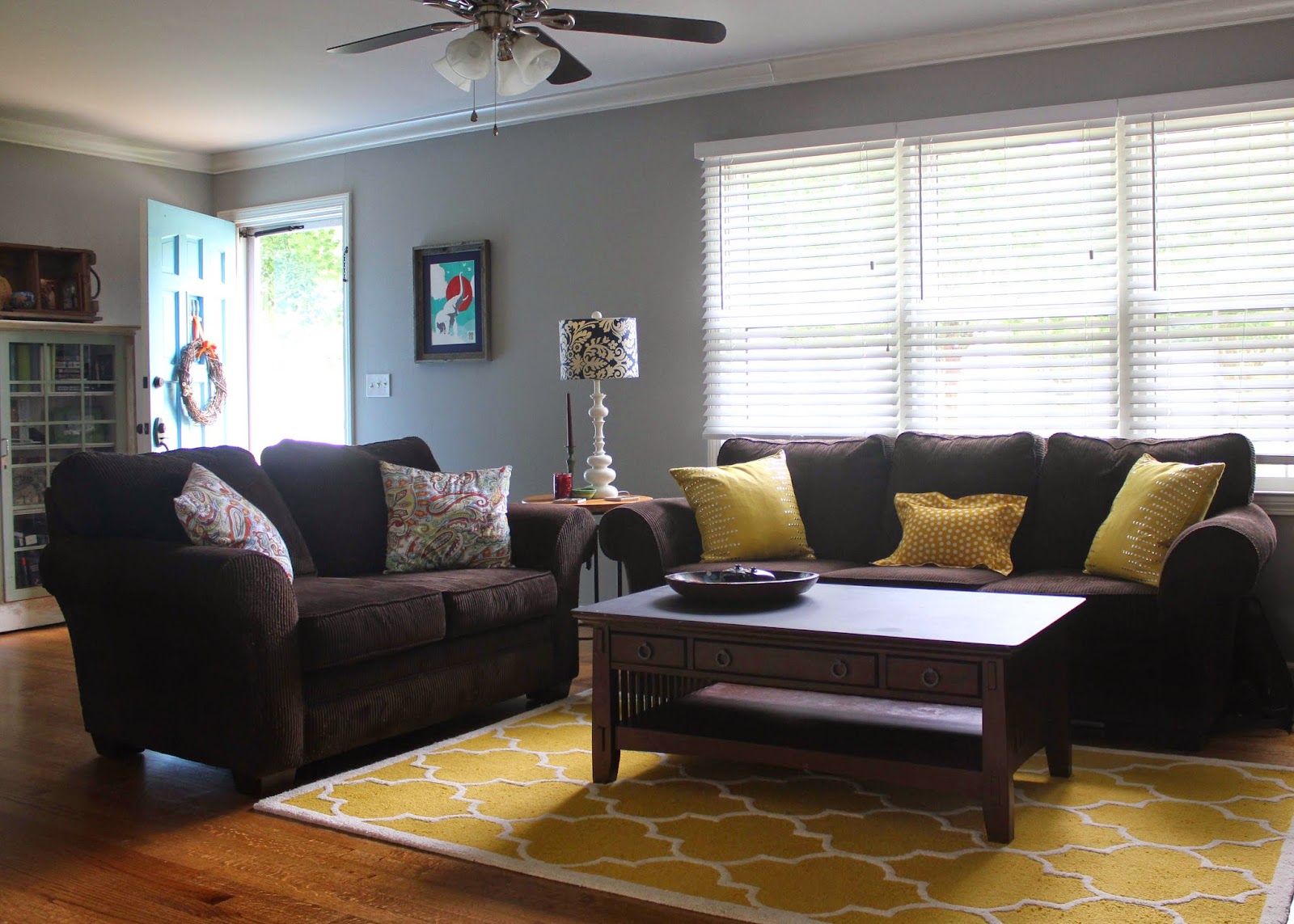 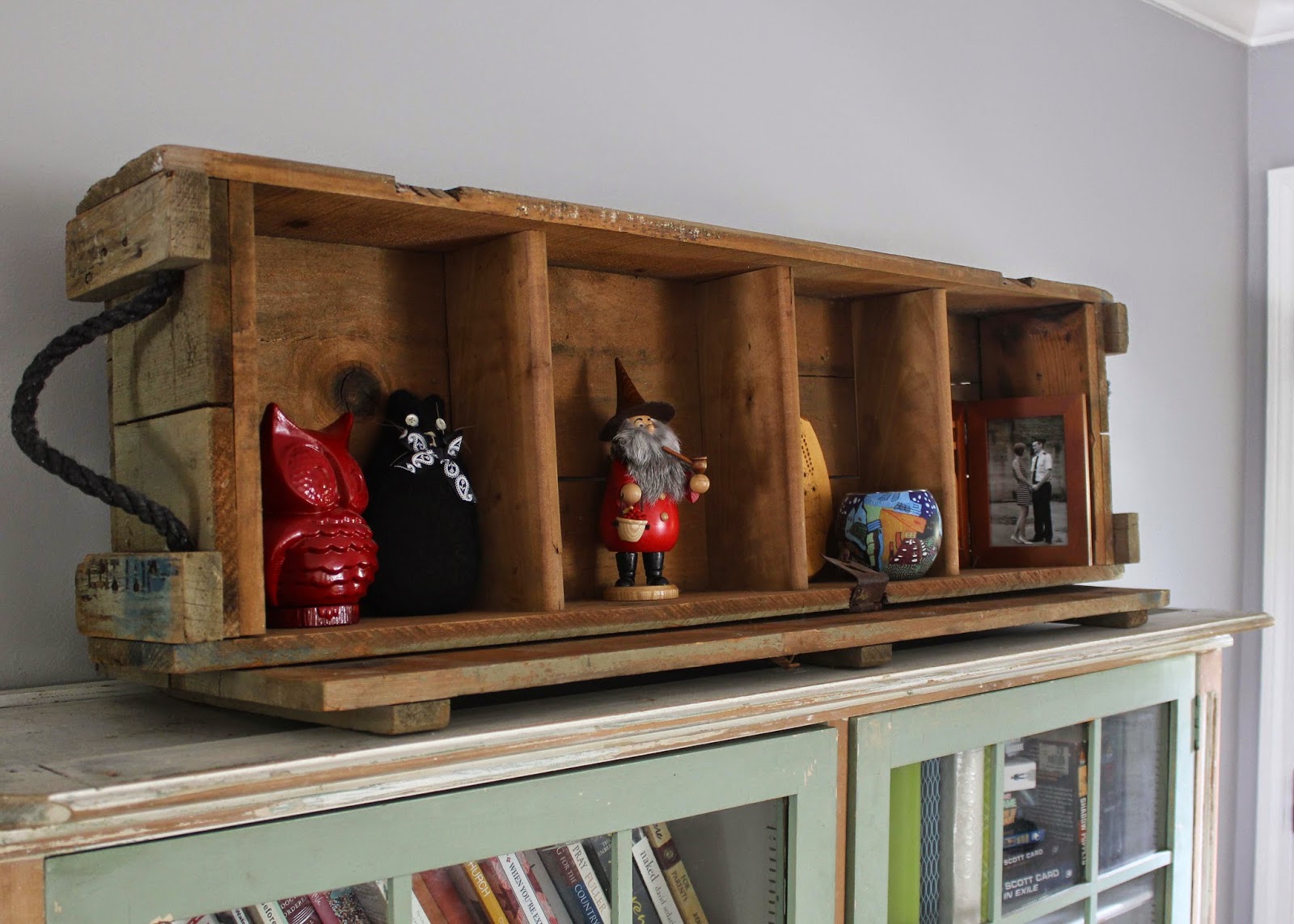 So what would I do differently?  The rug would never have been bought if I had known it was the loop kind.  Our black cat Remi picks at it constantly.  It only looks nice right now because I cut off all of the places he had picked out.  I guess that is just the gamble you take when buying something like this online.  The solid yellow pillows also were a "Oh! Thats my color!  We need pretty pillows!" purchase.    They are terribly uncomfortable and Myles is systematically picking off the metal dots.  That is mostly all of my regrets... and costly ones.

I originally planned to put curtains up but no longer think I will.  I think it would be too much trouble with too much furniture in front of them to really get to enjoy the look.  I have left a space open next to the Elephant for another similarly sized frame to go on that wall.  Unfortunately there was no special print for this year's Indie Craft Parade like I was planning to put there so we will see what ends up on that wall.  I am also hoping to pick out a few more smaller versions of the FiftyTwo verses for our hallway once Leslie has finished her project.

So there we have it!  I hope to share a few more spaces in the coming weeks.  Man that was fun 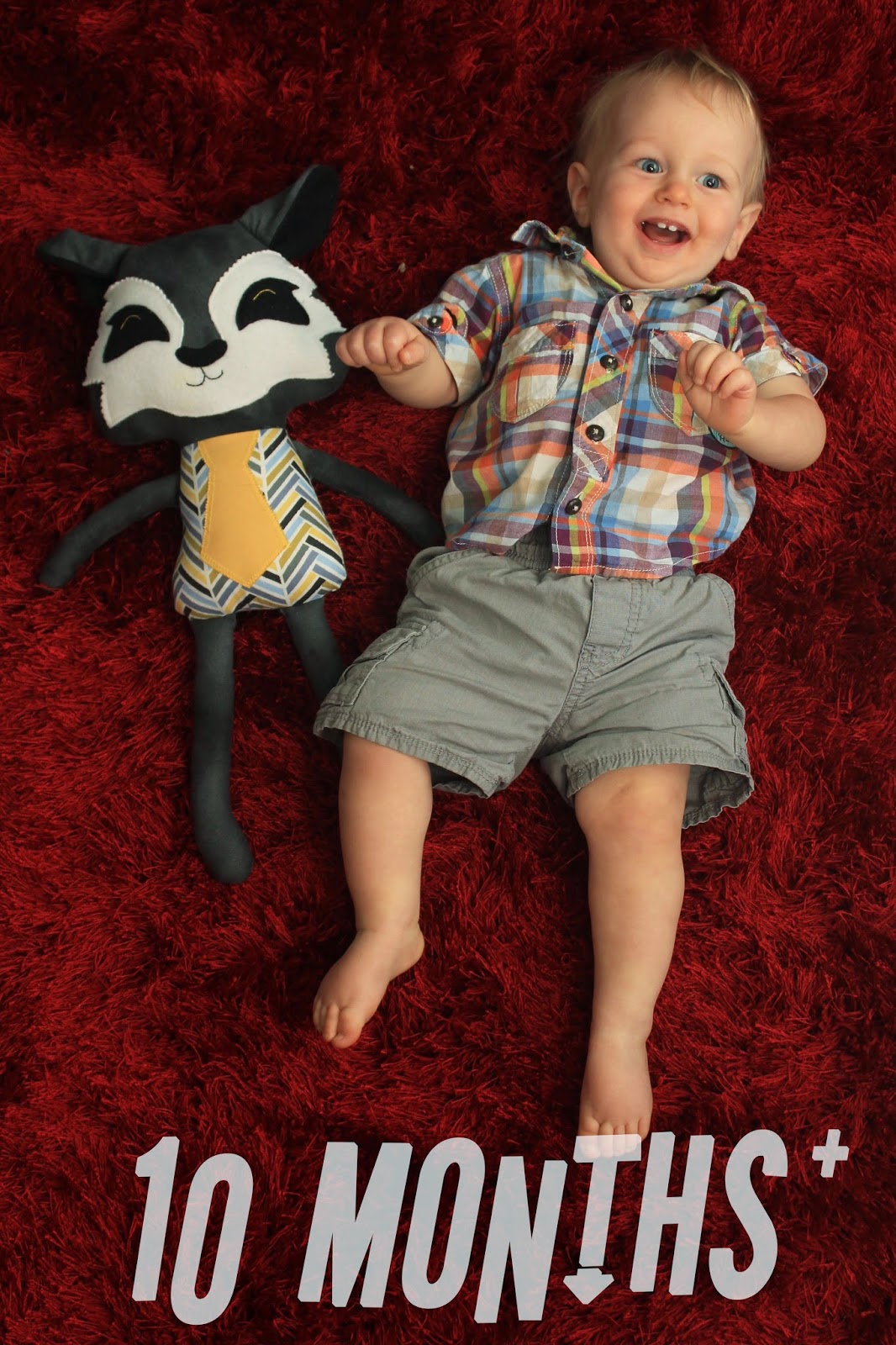 So I'm almost a week into his 10th month of life... it was a busy weekend.  I've had recuperating to do! And some work to get ready for our next round of visitors!  And more work to maybe, possibly, start getting photos for some roombyrooms.  I haven't forgotten... just had some last minute changes that I wasn't planning on in a lot of areas.  All good.  Enough about me. 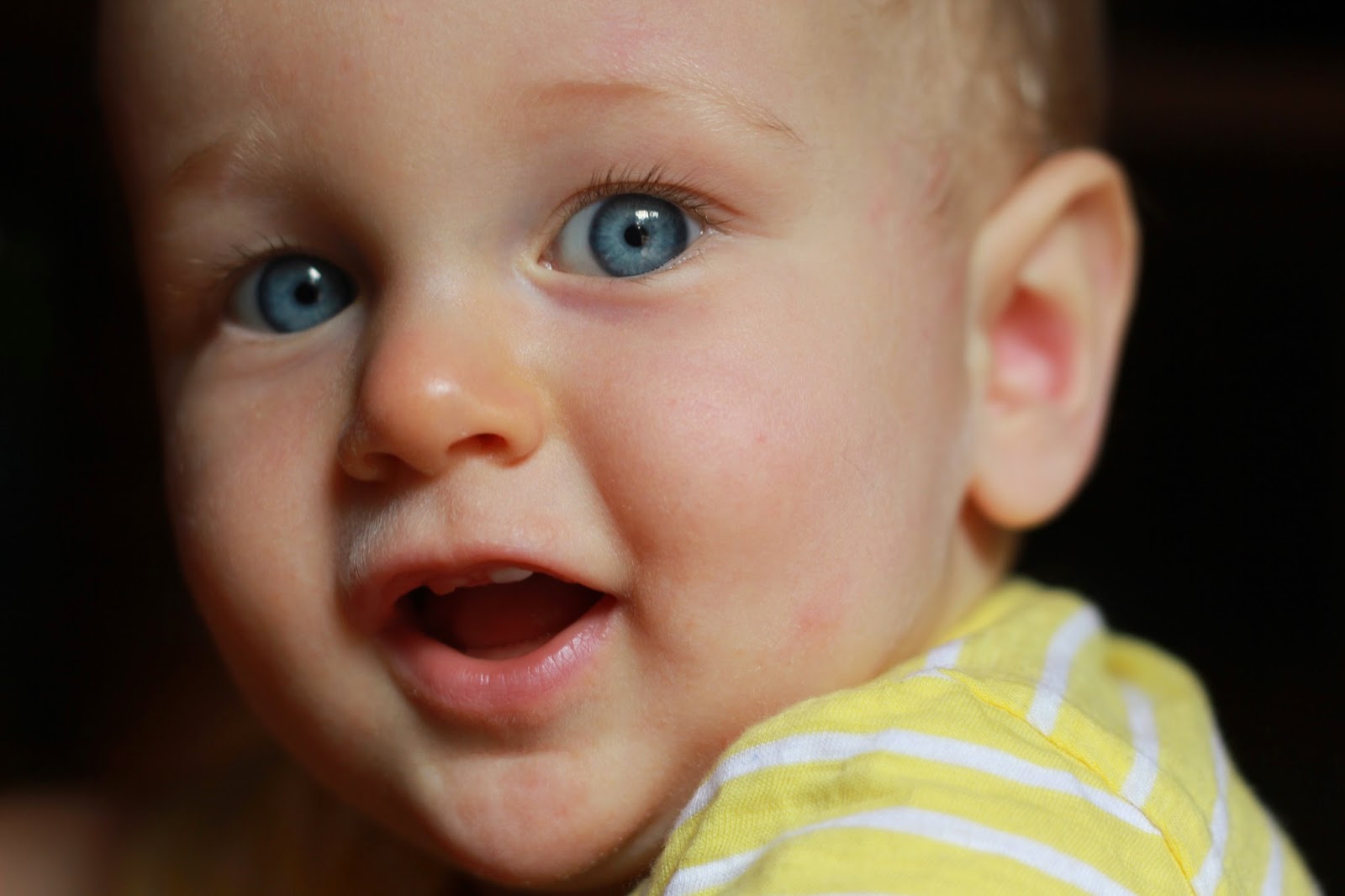 Myles Oliver.  Last Saturday (the 13th) you turned 10 months old.  The past month has been full.  Basically, the day after you turned 9 months old, you had your first tooth break through.  On top.  A few days later, another.  A couple weeks later, your bottom two started in... you now have 4 teeth that have broken through... but you can really only see the top two and the tip of one.  Teething hasn't been too bad; the top were definitely worse than the bottom have been, and even then, still not bad with Tylenol.   I'm afraid dear son that you are going to have teeth like your mom.  I'm so sorry. 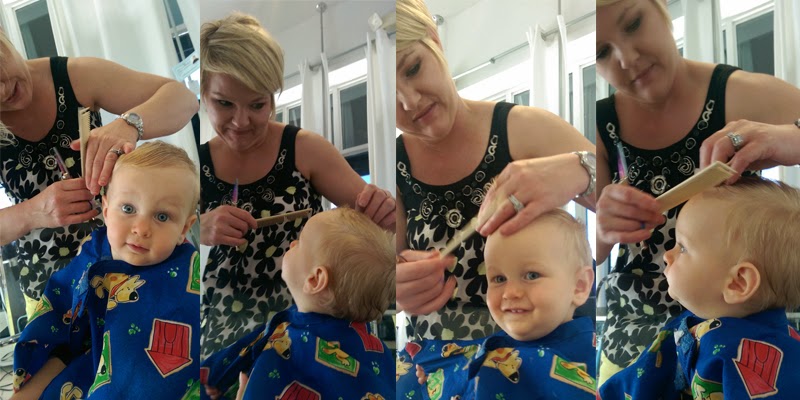 Midway through the month, you had your first haircut.  Mommy was overdue for one and so I figured I would get your's cut while we were there.  Charla from the church nursery was happy to do it for us.  She was so excited, and you were thrilled to get to see her!  You were a bit wiggly but Charla is pretty good at chasing you little guys in her chair.  She mostly just evened things up and got rid of the mohawk bangs. 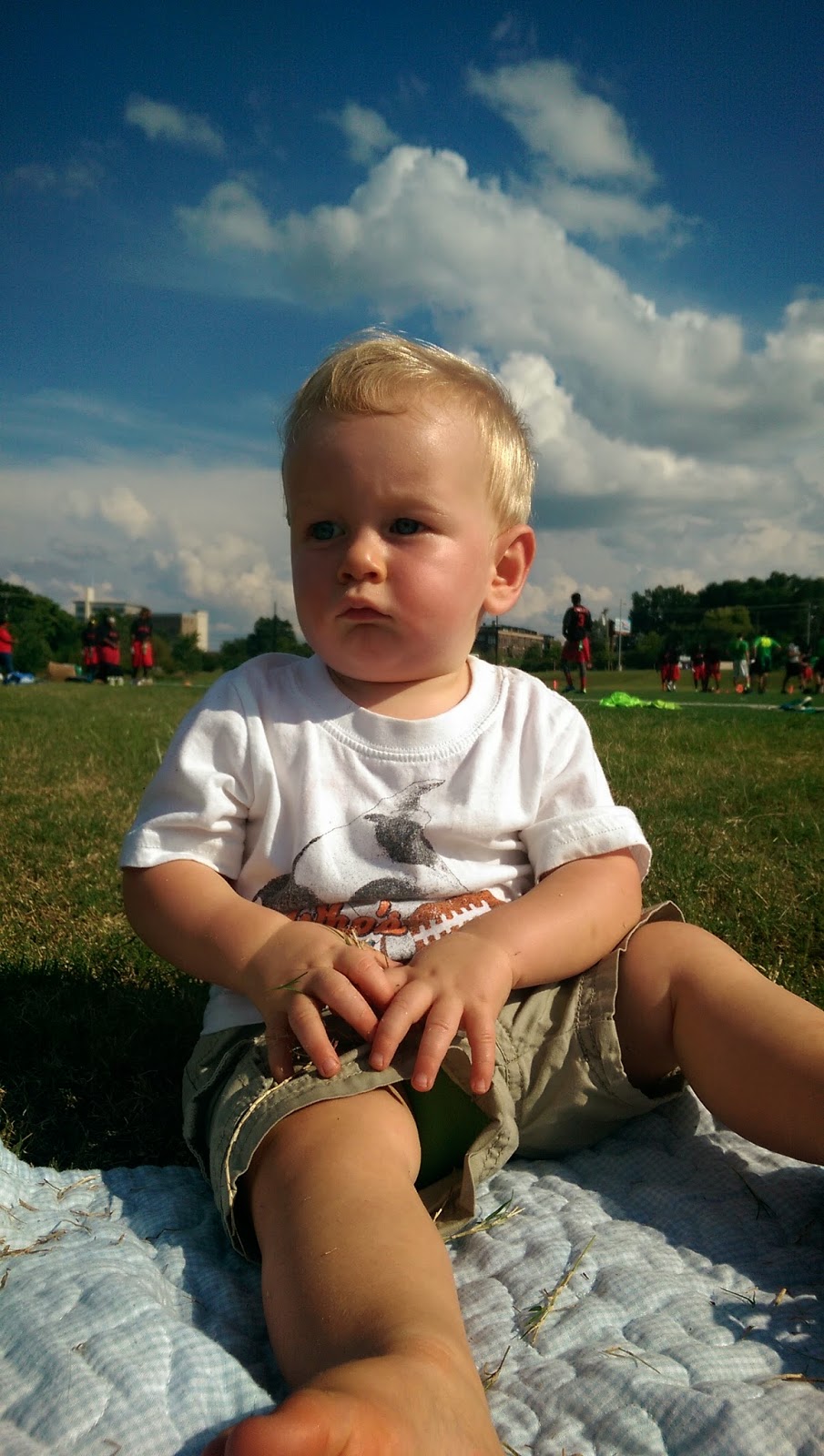 We managed to make it to all of your dad's flag football games this month.  You liked crawling around out there even though it was ridiculously hot most of the time.  Sometimes other babies made it out there with us.  Other times there was usually a resident's dog to keep you company. 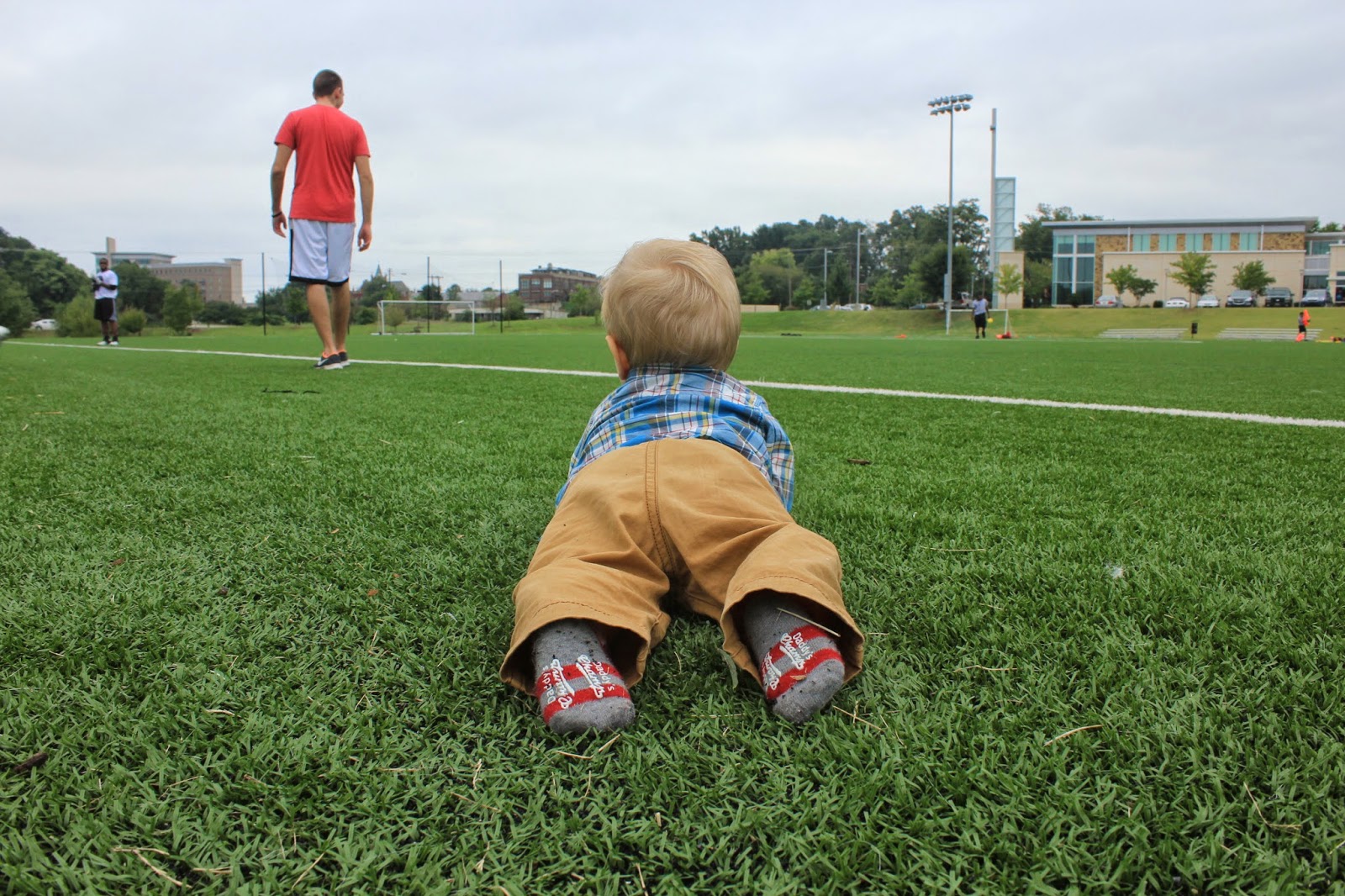 You are so big.  You are pretty well into 9 month clothes and can fit in some 12 month stuff if I want you to.  You are still such a ham; making us laugh all the time.  You still army crawl everywhere but have shown us that you are capable of normal crawling... its just faster on hardwood floors not to.  Cruising is done without a pause and you are having fewer head-bumps.  You are doing assisted walking; sometimes with only one hand.  If we try to let go you immediately sit down.

Still eating up a storm.  I'm amazed how much fits in that little belly.  An entire banana plus your normal oatmeal for breakfast??!!  You eat everything but are particularly fond of blueberries and goldfish crackers.  You LOVE yogurt and cheese but ever since you got some half-n-half all over your face, I have decided that you are allergic/sensitive to dairy too... it seems to only be a skin thing since nothing bad happens intestinally after you eat it but I figure I would be a bad parent to keep letting you eat it all the same.  I just have to eat my yogurt while you nap now.  Thanks to Anne, I ended up ordering a set of popsicle molds but have only busted them out the one time since I didn't think through using a vibrantly colored food pouch to make them.  It  did make for a great photo op though. You are pretty good at feeding yourself most things and are busting out the pincer grasp on the daily.  Palming some things into your mouth is still more efficient though.

You are obviously focusing much more on your motor skills than anything else.  Still only "babababababababa" coming out of that adorable mouth... sometimes "ba ba boo".  You still love people; attention from strangers makes long grocery trips possible and you love putting on your "shy" act for them.  You also fake cough when anyone around you coughs.  Its pretty funny.  Oh, and though he still won't let you touch him, you are developing a relationship with Remi the cat.  He has bouts of "crying" and you noticed it and have started "meowing" every time you see him now. 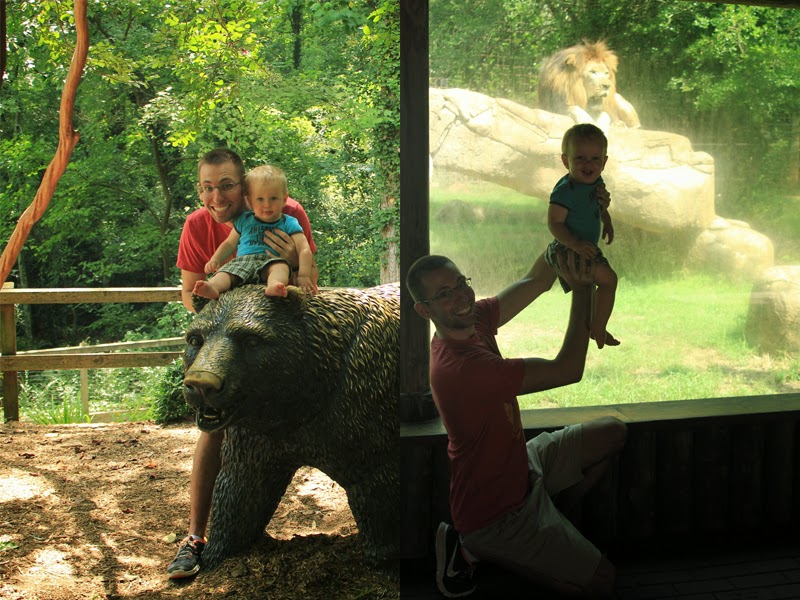 As mentioned in my last post, your uncle came to visit and we had a blast.  He is a fantastic uncle to you.  He focused on your ability to give very wet open-mouthed kisses and took that from the very occasional level to the I love giving them to everyone all the time level.  He also taught you how to "dance".  You had occasionally waved your arm to the beat but now you twerk bounce for a hamburger birthday card song of your dad's and to Usher's Cheerios commercial.  We just have to be sure you aren't leaning over the coffee table for this because you have now hit your chin and teeth several times.

Bedtime is still mostly 7pm.  You had about a week of wanting to be awake at 6am but have since gone back to 7am and even slept in a few times until almost 8!  You still have two good naps but they are further apart now, so I have a much nicer slot of time to get out of the house without interfering with them than I used to.

Otherwise, it is your goal to go everywhere you aren't supposed to (bathrooms) and do everything you aren't supposed to do.  Taking everything off the table with a flippant toss over your shoulder is a particular joy, as well as emptying every drawer you can pull open.  You also want to eat everything.  I have fished out a lot of junk from your mouth that I never realized was hiding under our furniture in the past couple of weeks, and have found out that you seem to think the chalk drawer in the coffee table (its a chalkboard!) is your own personal snack box.  You are even perfecting the mischievous looks and giggles to go with it. 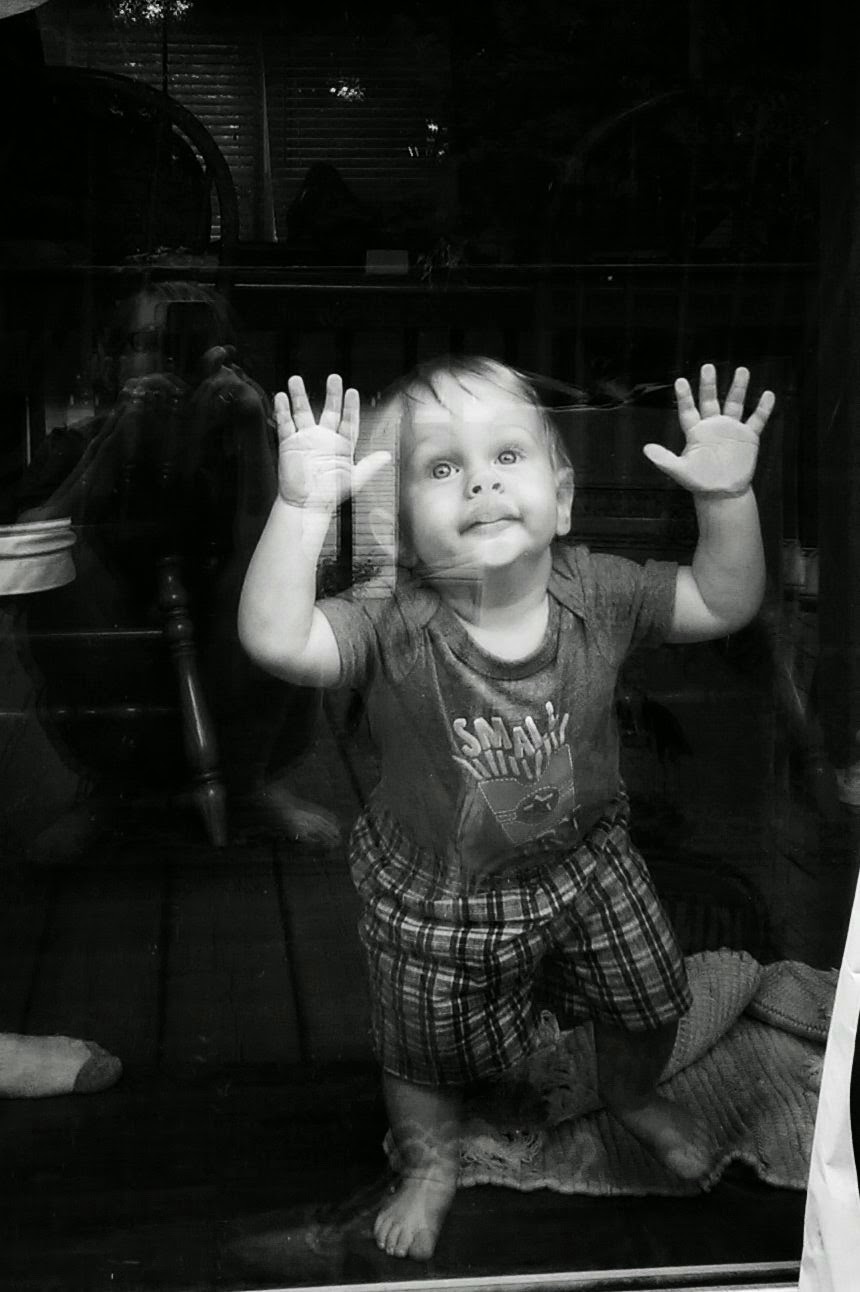 I had every intention of joining the currently link up each month... and then I forgot... and then I was on vacation the week of last month's post.  So this week it was written on the chalkboard coffee table in very large letters.  No way to forget!  Even better... Myles is sleeping in so I get to write! 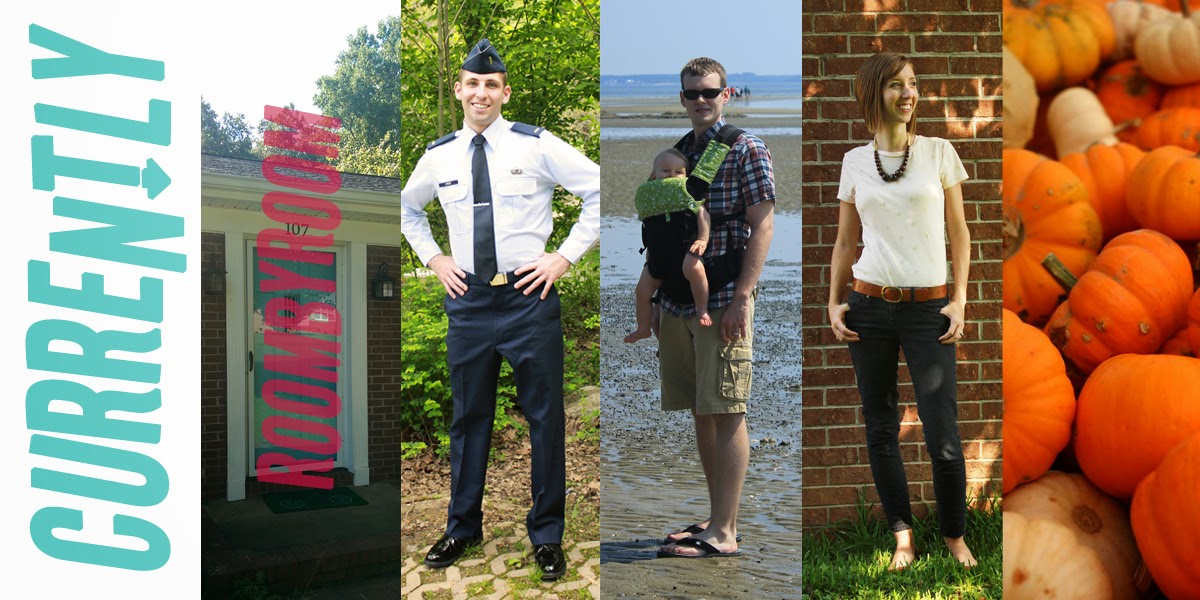 writing:  I have made a lot of progress on the house.  I know I will never really be finished but a lot of the rooms have had a ton of stuff done to them and it is time I bring back the roombyroom posts to start showing updates!

anticipating:  You probably remember that my brother moved to Japan with the Air Force about two weeks after Myles was born last November.  Well, he has been in San Antonio for training since July and next week, class is over and he will be in my house for a 6 days!  Myles gets some real time with his Uncle!  We are beyond excited over here.

missing:  My helper.  I guess this is more of something I have missed.  Kyle was off this past weekend and it was pretty fantastic.  We worked as a team to get a few things done in the yard and lots of chores completed around the house.  I have missed that lately.  It has felt a lot like he is just a guest in my house.  Not by any fault of his; I just try to get stuff finished before he comes home so that we can spend time together, and we do.  And he doesn't have time or desire to go shopping to pick things out to decorate/furnish the house, which is fine. But watching a show together isn't the same as getting things done together.  It was nice to feel like he was helping work on our home with me.  The fact that it was mostly chores that were stressing  me out was just a bonus.  He even helped me with my major wardrobe purge!

wearing:  I started following The Jones Market on Instagram because of a giveaway a few months ago and after day after day of seeing these unique beautiful kid-friendly necklaces, I finally bit the bullet and bought my own.  Let me tell you.  I wear it with everything.  Myles loves it too but he refuses to let me take a photo of him playing with it.  Otherwise, this is a pretty representative outfit of what I might wear  on a non sweltering day down here.

craving:  Labor Day has come and gone and with it the arrival of pumpkin spiced coffees.  Starbucks, and therefore Dunkin Donuts, seem to put it out earlier every year and I am not complaining.  I have had two DD pumpkin creme brulee iced coffees in the past week.  Thank you extension of happy hour!

Today I am linking up with Jenna of dearest love and Anne inRESIDENCE.  Go say hello!
Posted by hillary c. at 7:00 AM 6 comments: 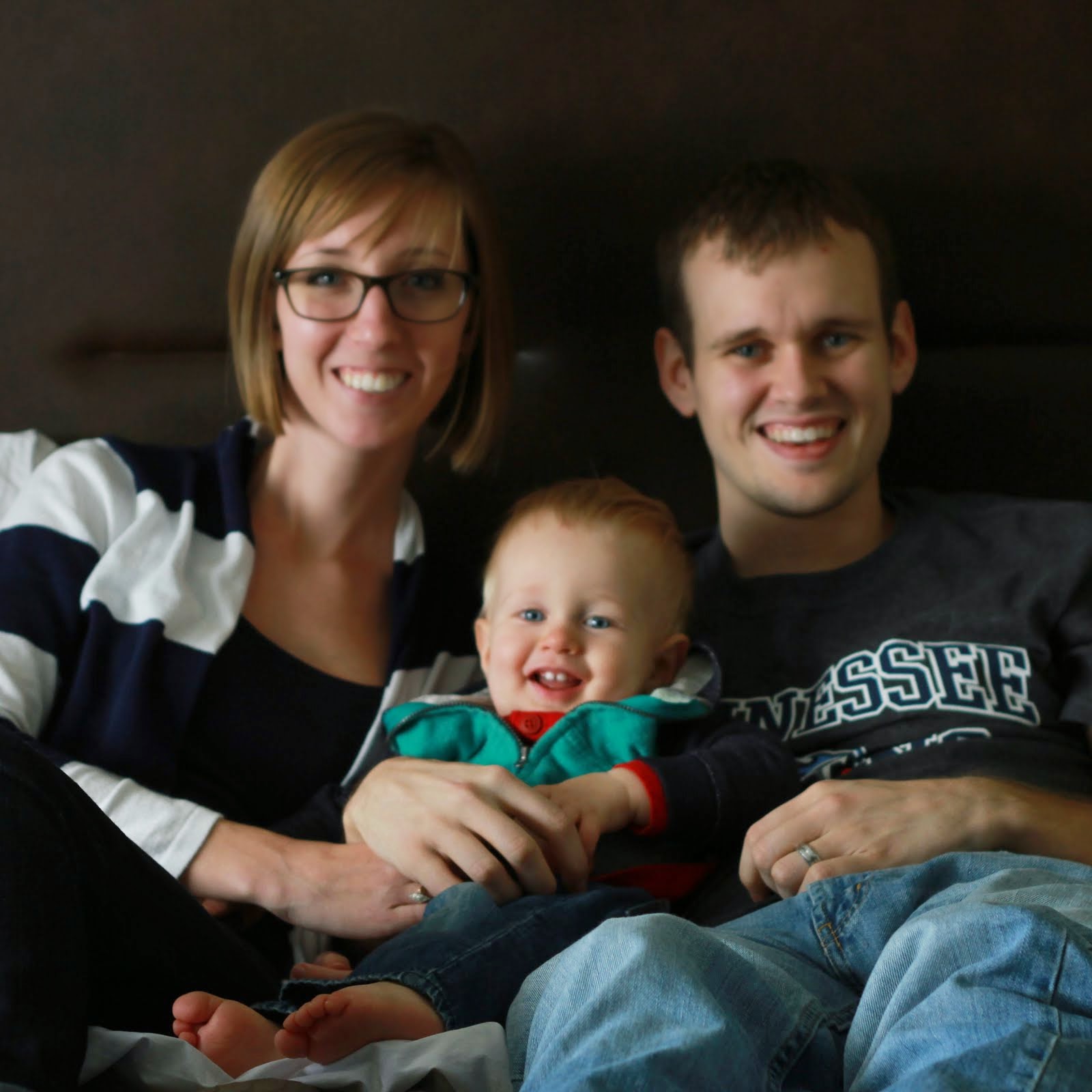